Through the Mississippi Darkness Rolling Down to the See

I'm the train they call the City of New Orleans....

What I said for Mardi Gras (2011) here and 2012 (here)
I have to admit I am stealing this from an actual restaurant and one I saw on Diners, Drive-ins, and Dives.  But who cares, I love NOLA cusine and I love to party so here goes! 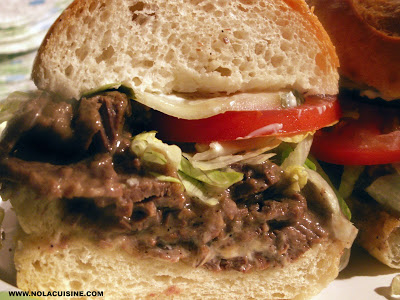 Wiki says the Louisiana Po' Boy sandwich originated in the very late 19th century when a local baker began making the bread that would ultimately be the trademark of the sandwich.  The name of the sandwich is most often associated with Bennie and Clovis Martin who operated a coffee stand in the French Market about 2 decades later.  The brothers were former conductors and very sympathetic to their former co-workers when a strike took place in the late 1920's.  They often provided free sandwiches to the strikers and thus the term po'boy.
Po' Boys are most often associated with fried shrimp or oysters on that crusty French bread.  If you are looking for some special love with your partner on Mardi Gras or later this week for V-Day, I'd recommend using those oysters.  But at home sometimes it is hard to fry and get that same signature crispiness you might get from a restaurant.  To me it's very hard to pan fry to the same precision as a restaurant deep fryer.  It is with that thought in mind that I present the beef Po' Boy instead.﻿
﻿
Ingredients:
2#  Top Round Roast Beef
For Gravy:
1/2 Cup Flour
1 Tbs Garlic Powder
1 tsp of Black Pepper
2 tsps of Kosher Salt
1/4 Cup of Vegetable Oil
1 tsp Kitchen Bouquet
3 Cups of broth (reserved from Top Round Roast Beef
For Po Boy:
2 10-inch French loaves
Mayonnaise to taste
Creole Mustard to taste
2 Tomatoes, sliced
2 Cups of Iceberg Lettuce, shredded
1 Large Dill pickle, sliced
Roast Beef
Directions:
*     Although the recipe for the Po Boy calls for 2#'s of Top Round Roast Beef I'd slow roast an entire 10/12# piece at about 300 degrees for about 4 hours in a roasting pan.  Cook the beef fat side up and top with some salt, pepper, and garlic.  Bast the meat with it's own juices occasionally.
*     Once beef is cooked remove and slice thinly against grain and set aside in casserole-type dish.
*     As the beef is almost done take 3 cups of broth from the roasting pan.
*     Pour the broth into a sauce pan on medium heat.  Heat until it's at a simmer.
*     Once at a simmer briskly whisk in the flour until completely combined (no lumps)!
*     Next, whisk in the garlic powder, salt, pepper, oil, and kitchen bouquet.  Again, make sure this is completely combined with no lumps.  Ultimately this should be a thick gravy consistency.
*     Once gravy is finished pour it over sliced beef into the baking/casserole dish.
*     Cook this at 350 degrees for about 45 minutes or until meat is falling apart.
*     Once beef is ready, slice the French loaf in half.
*     Spread Mayo on one side Mustard on the other.
*     Lay the bread on a baking sheet with the opening facing up.  Line the sides with the tomato slices.  Next pile beef into open center of the loaf and pile lettuce on top.
*     Place sandwich back into oven for about 5 minutes until the bread is crusty.
Enjoy with a Hurricane and make sure you have some beads to throw to a lady with the best tits!  :)
﻿
﻿
Posted by Ryan Beaumont at 5:56 AM