1. If a screenwriter turned you into a character in a movie. 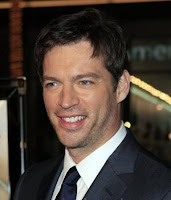 a. What stock Hollywood character would it be most like? For example: best friend, ditzy blonde, absent-minded professor, captain of industry, etc.  Absent minded professor DEFINITELY (for sooo many reasons)


b. What actor/actress would play you?  Harry Connick, some people say I look like him.  Unfortunately I don't play like him.  The celebrity Facebook match also said I look like John Ritter, but I think he would struggle to handle that part now.
2. What genre of movie is your life most like? For example: romantic comedy, goofball comedy, spy, coming of age, action/adventure, sci-fi, etc  Goofball comedy!  Let's talk Wedding Crashers meets Old School.
3. What kind of scene in a movie would you like to play most? Why?


a. Argument
b. Love scene  Are you "nuckin' futs!"  I'm a guy, of course I want to be in a love scene!  I want to recreate that swimming scene with Jennifer Connelly from the Hot Spot!
c. Gun fight
d. High-speed car chase
*  My second choice would be nailing the final shot at the buzzer a la Hoosiers!
4. Have you ever looked around you and thought “this is like a scene from a movie”? What were the circumstances?  Hell, I've tried to set up my whole Shannon's story as a faux The Player meets Up in the Air  storyline.  Problem is, that it's all too true!
5. Have you ever looked at a character in a movie and said, “Hey, that could be me”? Who/what was the character?   Yeah unfortunately, I always get a creepy sense of commonality when I watch Saving Silverman!
Bonus: Have you ever been in pictures–Hollywood film, porno, homemade video, or other type of film? Tell us about it. …and is it on YouTube

Nope, but I know people who were extras in Gods and Generals and a friend of mine's brother was in Toy Soldiers
————-
Posted by Ryan Beaumont at 9:23 AM

Email ThisBlogThis!Share to TwitterShare to FacebookShare to Pinterest
Labels: TMI

I love that you used the phrase "nuckin' futs!" Hahaha, I say that about once or twice a week. This post is pretty awesome, I might have to borrow it and fill in my own answers. Actually, I just made up my mind - I am going to borrow it. Done. Thanks!

I like Harry Connick and John R. Yeah, I guess it would be hard for John now to play a part right now but maybe not. ;-)