Hey Where Did We Go 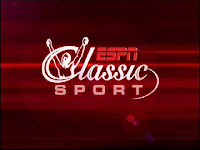 Today is a two pronged rip-off!  As I said before the entire "old flames" portion of my "retro summer" is a complete rip-off from another blog Crack the Whip I found through Ashley and Me.  The guy on the blog talks about the women of his past in much more alluring detail than I.  But to just tick that rip-off up a notch I am now ripping off something from ESPN Classic.  I am so much the dork that I love ESPN Classic and one of my favorite things on ESPN Classic is the 30 for 30 Series where they have made documentaries about some of the more unique stories over the 30 years of ESPN.  One of my favorite documentaries is about Marcus Dupree, one of the greatest football talents of all time.  He played his freshman season at the University of Oklahoma and was awesome.  But injury, fate, lack of tenacity, and mostly laziness kept him from achieving what was surely to be a Hall of Fame career in the NFL, sounds a bit like me!  Maybe Kat or Sassy somebody will write a post about me some day (Ryan - The Greatest Sex Blogger to Never Write about Sex).  But anyway, Marcus Dupree was in fact, as the documentary is titled, "The Greatest that Never Was."

And yet the documentary shows Marcus today as happy and content, satisfied as a truck driver and a grandfather.  So you come away in awe of the talent wasted but glad that this soft-spoken and good natured person came out OK in the end.  Again, I always like to look at the bright side!

Ah, Van Morrison's Brown Eyed Girl; what a sweet slice of chocolatey memories.  There was a band I used to love in college called New Potato Caboose.  I think I can get away with saying that as they are from DC (originally formed at Catholic U) and toured widely around the Mid-Atlantic.  I used to see them every time they breezed by Big State U and sometimes even in other towns.  I remember taking Laurie to see them; she was my brown eyed girl.  I remember seeing them with Cass as well she was my Hypie-chick.  My favorite song of NPC was "Gold Plated Crime."  There is a lyric in that song that goes like this "I've never know what it's like to make love and not feel fine."  I certainly agree with that statement and I'd have felt quite fine if I'd made love with any of these fine ladies I list here.  But alas, in these cases we were always just friends.  These ladies are in fact "the Bests that Never Were."

Laurie was beautiful (and still is), she had that Mediterranean look with long dark wavy hair, big dark eyes, and olive skin.  Perhaps she looked just a little like Sophia Coppola.  She was a fraternity little sister and we just clicked from the start.  I probably spent more time with her playing tennis, hiking, going out to dinner, or just talking than any girlfriend I ever had.  And as I often did I played my Svengali roll by getting her a job at my college work-place.  Yeah Tish, Laurie, Meredith... Ryan would pick up any lost cute puppie and give her a job.  But it did make work fun!  I think early on I set the friend/big bro message and that could somehow never be retracted.  Probably best though.  Of all the memories I have shared, my private memories of Laurie are the best of all these fine ladies and that is because they are in no way tainted by the pain of a break-up or let down.  So sometimes unrequited feeling can be best.

I've been thinking about Cass a lot lately because that Wildling chick on Game of Thrones looks a lot like her to me.  I wish I could have done the Wild Thing with Cass but alas we were just friends as well (I think). 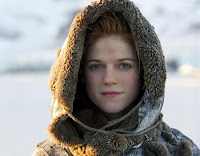 I've also been thinking about Cass a lot lately because she is another one of my Facebook pals.  The funny thing with Cass is that memories do fade and you begin to wonder what really happened.  Cass recently "friended" me on Facebook and sent several glowing messages about how happy she was to get in touch.  Among other things she asked about the times we went out and if I remembered kissing her.  I didn't, I think she was thinking we had sex but I'm pretty sure we did not.   I mean, I wish we did and as a guy I think I am more likely to think I did even if I didn't so this seemed odd.  But then again, I am easily confused so one really never knows with me so maybe we did.  I'm thinking she has me confused with some other guy.  But who knows, maybe I should just work up a mental image and go with it?  She also asked me if I had any pictures from the formal we went to once but I didn't.  She eventually found some and put them on her page.  My but I was a handsome devil back then!  Actually that is a lie 'cause she just had pictures of her, I must have been elsewhere but she did say I was handsome so let's just imagine.

But what about this Jodee girl, why is she here?

Jodee was another one of those girls I met in my new town after college.  Well, one of the one's I met before Shannon and then I didn't really meet any more after her of course.

I mention Jodee here because it was in fact the most haunting date I had ever been on.  No she was not a creepy girl at all, she was beautiful.  She had that Mediterranean look with long dark wavy hair, hazel eyes, and olive skin.  Perhaps she looked a little like Sophia Coppola.
Wait, didn't I just write something like that recently?

You know you would be right.  And that is where the creepy part comes in.  I remember seeing Jodee in my new city just after college.  I think this was in between chasing games with Brianne.  I remember actually feeling a shock to the heart when I first saw her.  I started to go over and say "Laurie, what are you doing here."  The resemblance was CRAZY!

From that moment I had to get to know her and I did.  It was very casual at first, I dared not tell her why I was attracted to her.  That would come off as creepy.

Eventually I did ask her out.  A guy I knew at work had tickets to the NBA team (a few towns over) so that's what we decided to do along with dinner beforehand.

It was a disaster!  Jodee's appearance, so hauntingly like Laurie, had me off the whole night.  I lost my mojo; I was off and there was no turning "it" on.  It was like my hard drive crashed.  I had the Laurie disk in my head and it wouldn't eject and I couldn't find my Jodee flash drive.  So many times I came so close to saying Laurie's name that by dessert I was too spooked to talk.  Sometimes I just caught myself staring at her (jaw probably open) not knowing what to say or feel.  And so we sat largely in silence.  During the game I could tell Jodee was bored but I had no game to change the momentum.  It was a long and excruciating ride home

In the end I would have been glad to go out with her again but the creepiness enraptured me and certainly made me tentative and thus not interesting.  Jodee never really talked to me again and even though I saw her on occasion I didn't push.  Jodee was a Jersey girl though.  Too bad she didn't look like Tish; I'd have know just what to do!

Hey if you took a listen to that New Potato Caboose Track above and liked it keep an eye out for them, sometimes they still show up at the State Theater in Falls Church, VA.  If you go who knows you might run into a 40-something dude with a vacant Michael Scott-styled look that perhaps vaguely resembles Harry Connick and/or John Ritter (some more visual, you figure it out).    :)

Posted by Ryan Beaumont at 1:47 PM

Marquis Dupree had the chance...

Sassy somebody will write a post about me some day (Ryan - The Greatest Sex Blogger to Never Write about Sex).

PC... there's your problem. Should have been functioning like a Mac.

I love reading about twenty something Ryan B, flustered by attractive brunettes so in the end he runs back to blondes. :)

Oh to have the Beaumont game in action.