Or Jenny Jenny Who Can I Turn to

First remember to check out Kat's Blog Carnival this Sunday, I'll have some more stuff on my first time and Kat and other's will likely have far more interesting experiences!

Past Adventure #1 - Jenny (The Road Not Taken)

My Jenny story is a good illustration that timing is everything.  I wrote a Fantasy story on Kat's blog once about a friend from college, Meredith.  Of course it was mostly true with just a few embellishments.  The sex part didn't involve my friend Meredith (although I wish it did, she is a really great person and we would have been great together); it involved one of her friends.  That event happened over one Spring Break just before I started my first "career" job.  I had graduated the previous summer and had just hung out so to speak from about August to March.  That was an awesome time in my life.  During that "hanging out" period in my life I had an on-again, off-again relationship with Jenny, another friend of Meredith's, a "friend in need is a friend indeed" I always say.  Meredith was such a good friend! 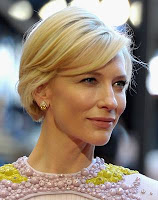 Jenny was gorgeous with a very Scandinavian look maybe a bit like Cate Blanchett but a bit edgier.  She was tall, probably about 5'10" with blond hair and blue eyes.  Her hair was that pixie-like bob look that was popular back in the late 80's/early 90's.  Thinking back on her personality, she kind of reminds me of Sandee a bit too, very laid back - we just clicked.  She was an English major so a bit more alternative than I.  But then again, I remember shooting pool and listening/singing to "Friends in Low Places" with her; in fact that was kind of our song.  Then again I also remember going to see the Smithereens with her.  So she was all over the place, just like me.

What was really good about this was that I was not looking for a girl friend when we met.  I had just graduated and I knew I would be leaving.  When I met her I was just myself, no pretense and that is when I have always had my best success with women.

In fact I remember how we hooked up so to speak.  I had met her through Meredith and had hung out a few times but didn't know her well.  My frat was having a Halloween costume party type thing.  I was over at Meredith's drinking beer trying to decide if I was going.  I was a graduate now and was not sure I should be messing with that kind of Tomfoolery!  Jenny was over there as well.  Long story short we decided to go but I didn't have a costume.  Meredith and Jenny worked at the same restaurant in town at Big State U and they dared my to wear their waitress uniform to the party.  I agreed.  So I ended up wearing Jenny's uniform.  I know you're saying she must have been a rather robust gal but you have to remember I was a 30" waist up until the late 20's so I was a bit of a bean-pole back in the day.  Btw, ego drives me to say that I have happily returned to a 34" waist within the last few years!   :)

So I was of course the hit of the party with a jean skirt and tee-shirt from the restaurant.  I even had an order pad!

And then it happened.  Well it wasn't really an all of a sudden thing, I had been hanging out with Jenny most of the evening.  But at one point I was joking around and taking fake orders from people at the party.  I turned to Jenny and asked for her order.  She then takes the pad from me, scribbles something on it, and returns it to me with a smile.  I look down and see Jenny 867-5309.  Well, it wasn't that number but it was a number, her phone number.  Hint taken!

The next day I called her and I took her out to dinner.  I wouldn't call us a couple but we did go out often over the next few months.  Over a break I went to see her in her hometown and we went to see the Smithereens as I said above.  I admit I started to think about finding a job in her hometown; I really liked it there and their were plenty of opportunities in that area.

I was certainly thinking Jenny could be the one.  I could get used to looking at that beautiful pair of ti...eyes!  She was a great kisser as well, et al.  Kissing her soft lips was hypnotic as I felt her soft body and drank in her scent.  She always smelled so good; she wore some type of floral/appley smelling perfume.  She was also naturally beautiful, looking even more gorgeous in the morning with no make-up and mussed hair as she did at a night out on the town.  She had beautiful, delicate porcelain skin that was so soft to the touch.  She also always referred to me by my last name for some reason.  It's funny looking back there was a physical attraction but then again it always felt like I was out with a pal as well.  Funny the things you remember.

But I got a job offer in another state and it was just what I was looking for.  I got to thinking that at 24 I was too young to be thinking about choosing a job based on where my girlfriend would like to live.  How did I know that Miss Right(s) might not be living in this new town and that she (they) was (were) just waiting for me.

The painful thing is that Jenny said she would quit Big State U and go with me.  There were schools in this new town that she could attend.

Me with my Vulcan enlightened self interest at the time said "you don't want to do that."  I made it sound like I had her best interests at heart and to some extent she was too young to follow a guy she had only dated for a few months, I think she was only 20 at the time.  But in truth I was looking for the next big thing and assumed I could always pop back up to Big State U on weekends when the need arouse.

Yes ladies, this is how guys think sometimes, don't ever think we are God's gift - we ain't!

Hey wait Ryan, I just read that Fantasy Post on Kat's blog and if I'm putting 2 + 2 together you must have been dating Jenny right up to that point and then went off and screwed that other chick in Key West over Spring Break.  What kind of creep are you!

Wait, I think that was the George deBoeuff that made me do it!  Ah well, you would have me then.  Of course I am the best kind of creep, A GUY!  Because, as I said, that is what guys do sometimes.  Or until they get daughters and then they become tame!   :)

Well I passed on Jenny.  I did meet some great ladies in my new home though.  In fact I wrote about Natalie once, a girl I met in that new city.  I also met Jodee and Brittney who I may write about later.  And then finally I met this super sweet quirky gorgeous girl with the prettiest Auburn hair, steely blue eyes and a warm smile.  Her name was Shannon and I loved the way she chased me.  I let her catch me and the rest is history.

But often I think about Jenny and the road I chose not to travel.
Posted by Ryan Beaumont at 8:00 AM

Great story to reminisce and I bet you had great legs at that party.

Shannon is a redhead? All this time I had no idea.

Ah, nostalgia. Fun to read about your logic. But if you don't write about the first kiss or describe some part of the sex or something, we may have to revoke your sexy blogger card!

@ Gertie - Yes I do have good legs if I may say so. The next story will be up Friday as part of Kat's new project.

@ Sassy - With me what is imagined is likely to be far better than reality!

@ Max - You should commit some of those memories to blog and join in on Kat's new project!

I can't wait until 10 years from now when your writing the "What Could Have Been" post about your favorite blogger.

What's that? did you just mumble something about me not being your favorite blogger?

Jenny was smooth with her number giving trick. Good for her.